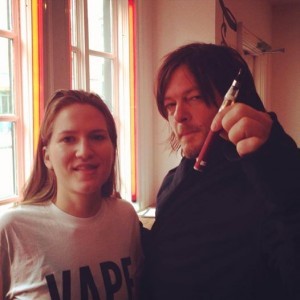 Because it’s been awhile since the last time we did a celeb feature, here ya go! Here’s the latest list on all the A-listers who have been seen out and about puffing along, repping the vapelife! It’s due time, because if there is one thing that makes the vape world happy, it’s seeing famed folk enjoying the smoke-free life, loud, proud, and in the spotlight.

Heartthrob extraordinaire, zombie-killing machine, and vaper. Oh, Norman, could you be any more awesome? The longtime smoker with a certain rebellious streak has been recently seen vaping, flaunting his vaporizer, and actually shopping for e-juice in person. Nothing wrong with replacing an old habit with a modern, new method, especially when it’s smoke and odor free!

Rock royalty and vaper; Dave Grohl has made it clear throughout his extensive career that he simply, rocks! Recently, he was spotted doing a little shopping in a Canadian vape shop grabbing some new vape gear.

Another rock ‘n roll icon, Dave Navarro, has also switched to vapor smoking! He has been pretty outspoken about his enjoyment of the vape, and openly discussed his decision to quit smoking, which he described as harder to give up than heroin. Well, we are certainly pleased that e-smoking helped him along the way, and are even more happy for him for gaining total control over his smoking (and life), and even managing to halt his nicotine intake!

Pop princess Katy Perry enjoys singing about kissing girls, and offering reasons why Cali is the place to be, however, we are totally more interested in her vaporizer action. Cute and sassy, her message is even more fun when she’s got a vape in hand.

Ah, vaping. Smoking has gotten so much more interesting since things have gone in this direction. We’re always thrilled to know how vapor positively impacts the lives of anyone who has switched, and celebs only reaffirm how awesome the #vapelife is!

The Stars and the E-Cig: A Love Story