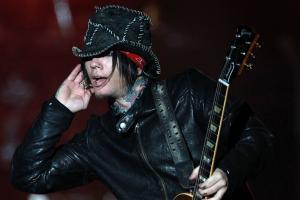 Either Axl Rose’s perennial badass behavior has rubbed off on his GNR protege, or DJ Ashba is just living out those rock ‘n roll fantasies! Case in point: his Memorial Day Weekend brawl that got ignited by his public vaping extravaganza.

Vaping in public can be okay. Many public places are perfectly cool to whip out your vape pen and start puffing. Many people, smokers or otherwise won’t give a hoot, and will hardly bat an eye. However, there are times those around you will think otherwise. And, in that light, if you happen to be at a show, and you decide vaping is the right thing to do at that moment as you listen to some rockin’ tunes, and the guy next to you complains you about the vapor… be polite and just stop. Or go elsewhere… Or negotiate.

Even if you’re the guitarist from Guns N’ Roses. Who found himself in this uncanny predicament and, instead of doing the smart (non confrontational) thing, got into a fight… All in the name of vaping.

DJ Ashba, Guns N’ Roses’ current guitarist, was just kicking back trying to vape at the Romeo Santos gig at Planet Hollywood on Memorial Day Weekend. When met with the complaint, Ashba remarked “What are you going to do about it, buddy?” and that was it. Things heated up to the point where arms were raised and the two busted out with a fight.

In other words, my friends, this is not how to behave in public with your vape pen or e-cigs. I mean, we get it. We wanna vape anywhere we damn please, but starting fights is just silly. Violence has no place in vaping, and public displays of macho vaping just makes the culture look lame. So, vape on, y’all! Remember all the cool ways to use your e-cigarette, and don’t forget your etiquette! And PS- don’t be a menace in public.

PrevPreviousE Cigs vs Vaporizers Comparison
NextWhy Does My E-Cig Make Me Cough & Have A Sore Throat?Next