How Do Vaporizers Work? 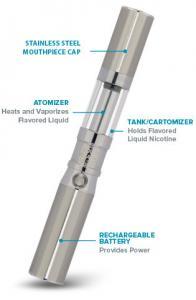 E-cig vaporizers are not a whole lot different in their inner workings than standard, two-piece, cigarette-look-alike e-cigarettes in how they work, even though they look entirely different.

Just like typical e-cigs, they are powered by a battery which holds a microcomputer smart chip, serving as the “brain” of the vaporizer. They also contain an atomizer (the heating mechanism), which is either a separate component or part of the cartomizer or tank, and they have a compartment, either a cartomizer or tank that holds the e-liquid.

The battery is the power source, and unlike basic e-cigs, vaporizers are known, loved, and obsessed over for their high-powered batteries. These things are pretty darn powerful, and can produce some crazy hits of vaporized nicotine liquid! If you’ve only ever used cig-alikes, you will be blown away by the level of vapor a vaporizer can produce. The battery contains a smart chip, and this works to direct how things get run on the interior, and it controls the other important parts of the vaporizer.

Setting up the vaporizer is simple. Before the first use, the battery should be charged to 100%. Filling the e-liquid doesn’t take much effort or time, however it should be dripped onto the sides of the cartomizer and filled to only 75% capacity for the ideal performance.

When the use takes a hit, it causes the battery to power up and the smart chip to send a signal to the atomizer that it’s time to heat up. When it does this, it automatically vaporizes the e-liquid, instantaneously creating the hit, which the user will inhale and exhale, savoring the whole exciting process of high-powered, smoke and tobacco-free vaping!

The end result is a process entirely similar to smoking a tobacco cigarette, only in a much more modern, cleaner, more dynamic way. Vaporizers are the future of vaping, and if you are interested in experiencing the power of using one, check out the South Beach Smoke Air!

Reasons You Need a Vaporizer