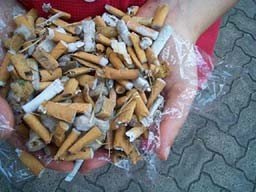 South Beach Smoke is committed to standards of excellence and high morale. Our products provide an invaluable service and benefit the lives of our user’s greatly. We proudly stand by our electronic cigarettes for the positive impact they are having on the health of people choosing to opt for smokeless tobacco, as well as the health of the environment of which is getting polluted far less because less people using tobacco smokes. Happy to support causes of this nature, it was only natural to support the Green Bay community as they work hard to make it a healthier place to live.

The city of Green Bay, Wisconsin is taking cigarette butt pollution to a new level. Fueled by a grant from the Keep America Beautiful organization, the “Don’t Flick It” campaign is looking to greatly enforce the city’s litter ordinance. Fines can hike as high as $500 per offense, and the city is hoping to tackle to major hurdles: littering, and smoking.

Cigarette pollution is definitely not a new issue, and is responsible for problems throughout the world. After a cigarette is finished, it is just too easy for the user to flick it to the ground, careless of the after effects of the pollution.

It’s pretty amazing that a city like Green Bay is taking such a proactive role to support the health of it’s people, as well as to protect the environment from the damage of cigarettes, which is 100% preventable. As a brand of e-cigarettes, offering an alternative to the horror that is cigarettes is the core of what our business essentially is. We are thrilled that cities are now seeing the need to motivate their people to maintain smokeless environments.

Electronic cigarettes allow customers the freedom of being smokeless, of protecting their bodies from the ills of tobacco smoke and residual tar. They also provide freedom from the litter and the mess that is too often left behind after the pleasure has been inhaled. Since July of 2010, Wisconsin has held a statewide restriction against smoking while indoors within the majority of workplaces. By comparison, you can literally smoke a South Beach Smoke e-cig wherever you want without the threat of smoke. With excellent reusable batteries, vapor cigarettes are keeping a lot of trash out of the environment, as well as off the grounds!

With that said, Don’t Flick It, vape it!