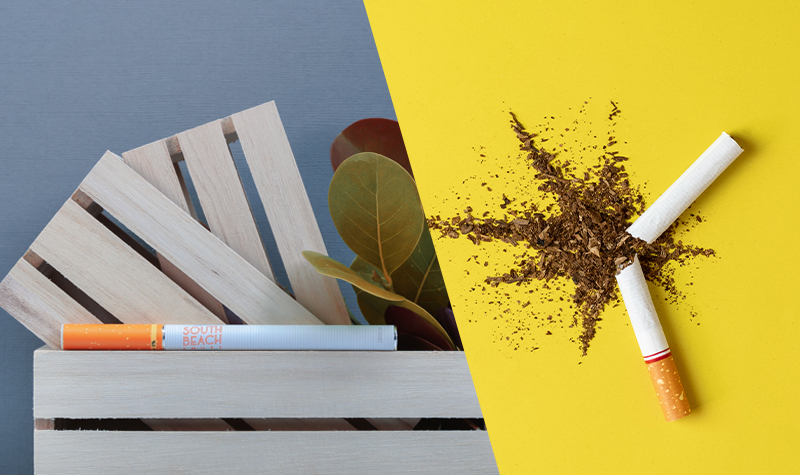 It’s been a debate that’s raged since the advent of vaping: what are the differences between e-cigarettes and traditional cigarettes?

At a glance, the two seem fairly similar. After all, they’re both delivery devices for nicotine. In addition, they’re both subject to laws that restrict their use to legal adults. However, that’s where the similarities stop.

Several factors draw a distinct line between vapes and tobacco products, though. Their history and modes of action clearly separate cigarettes and e-cigs into separate categories.

Cigarettes vs. E-Cigs: The Background

Humans in North and South America have cultivated tobacco for thousands of years. In fact, when Christopher Columbus landed in North America during his famous voyage, many of the indigenous people he encountered offered him tobacco as a gift. He returned to his patrons in Spain with samples and introduced Europeans to the plant for the first time.

E-cigs, in contrast, trace their origins back to more recent history. Humans first began trying to develop e-cigarettes in the 1960s. However, no one reached any sort of mainstream success until 2003, when a Chinese inventor built the first tobacco vape in Beijing.

They didn’t make landfall in the US until 2006, and started becoming more popular in the 2010s. Since then, vape companies have become as well known as tobacco brands like Marlboro.

Both cigarettes and e-cigs essentially perform the same function: get nicotine into the body. The key difference between them, though, stems from how they work.

Cigarettes are all about combustion. A farmer cultivates tobacco plants and harvests the leaves once they’re ripe. Then, a tobacco company dries the leaves, crushes them up, and rolls them into cigarettes or cigars. To smoke tobacco, you need to utilize combustion. Burning tobacco releases nicotine-infused smoke that a user can inhale to feel its effects.

Lighting tobacco causes the release of two dangerous chemicals: carbon monoxide and tar. These two chemicals are extremely harmful when inhaled, and can lead to lung diseases like emphysema.

E-cigs, in contrast, function through vaporizing a liquid nicotine extract. There’s no open flame involved. Instead, a battery in the e-cig heats a metal coil that vaporizes the e-liquid, a solution made of flavoring and nicotine extract. This creates a mixture of water vapor, nicotine, and other compounds that a user can inhale to experience nicotine’s effects. The vapor from e-cigs doesn’t contain carbon monoxide or tar, although it does feature other chemicals, which does not mean that e-cigarettes are a safer alternative.

Sometimes, companies will try to tout e-cigs as a “safe alternative” to smoking traditional cigarettes. This isn’t true, though. Both e-cigs and paper tobacco cigarettes contain nicotine, which the FDA has recognized as addictive and potentially harmful. Instead, both electronic and traditional cigarettes offer users a way to enjoy nicotine in different ways.

If you want to learn more about the vapes and e-cigs that South Beach Smoke provides, check out our online store.

How to Refill an E-Cig Cartridge

Mouth to Lung vs Direct to Lung Vape Guide

Sheer Odorless: How E-cigs Eliminate that Foul Smell in the Air

A Little Tobacco History and Why It's Time to Move On